Our Ayi had a limited repertoire of dishes that we could/would eat.  In the beginning it was a huge problem because LiLi turned up her nose at much of the bland food.   After I came back from a work trip to Hunan reporting that I loved the Hunan spices, she started adding chili sauce and peppers and both LiLi and I were happier.  After several months there were a handful dishes that Ayi and I knew would be eaten so she pretty much stuck to those.  An Indian colleague offered to teach Ayi to cook our favorite chicken tikka masala and she declined to learn.  I tried to teach her to bake cookies when we first bought the table-top oven but it didn't stick.  So, I figured this was what we had and it was fine with me since I didn't have to shop or cook, who cares if we're eating the same things over and over.

But then my mom's group posted a cooking course for Ayis.  I thought that would be perfect so I asked Ayi.  She said she would be interested but we learned that it was very far away and would cost a fortune and an hour or more travel each way.  Then we discovered that the same school--which is also a catering company called Tina's Workshop--would send a chef to teach one's Ayi in one's own home.  Bingo!  Ayi was very enthusiastic about it, surprisingly.  So...in comes Chef Bai: 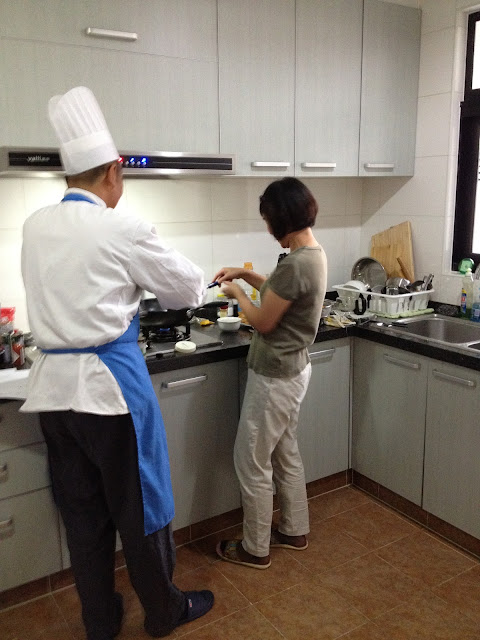 The first set of dishes I wanted Ayi to learn were seafood dishes.  Since I don't eat meat and since LiLi loves fish, this seemed useful.  Ayi doesn't know how to shop or buy fish, though, so Chef Bai wound up taking her to various markets.  Tina had had to order banana leaves for Vietnamese dish fish steamed in banana leaf.  She got them off Taobao which has everything.  They were beautiful and dried on our clothing rack. 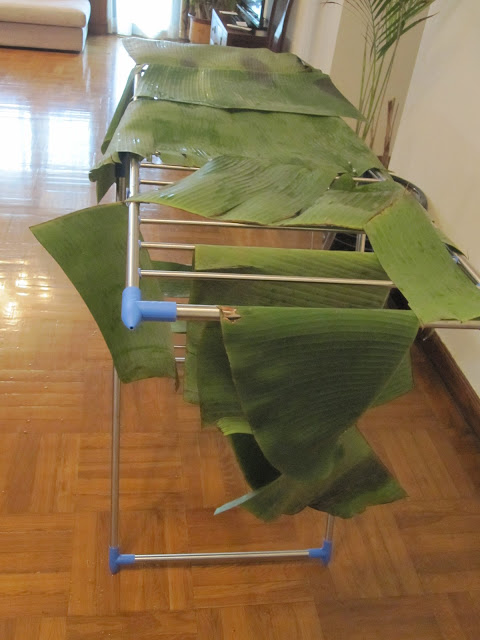 Then the two of them cooked up a storm at our apartment.  It was fantastic!  We had him come a 2nd time too so she learned a total of 8 new dishes including chicken tikka masala and carrot cake.  So now we have an ayi who can cook awesome dishes, and shop for spices and fish.  I love Beijing.

Heat Back On Tomorrow 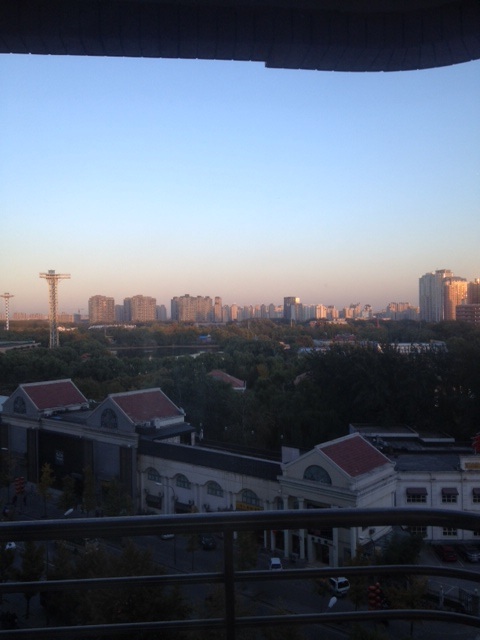 Like Spring, Fall is a very very short season here.  We went from flip flops one week to boots the next.  The government controls the heat in Beijing and we are cold.  It got down to 1 degree C last night (low 30s F) and with no heat in the apartment we piled both comforters on one bed and slept huddled  together.  In the office my colleagues are wearing coats, scarves and fingerless gloves sitting at our computers.  We talk about the merits of long underwear and wool.  The weekend promises below freezing temps and precipitation.  What?  Um...snow.

Our expat apartment includes an extra four weeks of heat a year, two on the front end and two on the back end.  Everywhere else the heat comes on November 15 and off March 15th.  My real estate agent said we'd appreciate the extra two weeks when the time came and boy, do we. 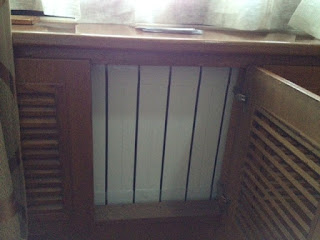 The government's gongren (workers) have been checking the apartment pipes since the heat comes from hot water radiators. 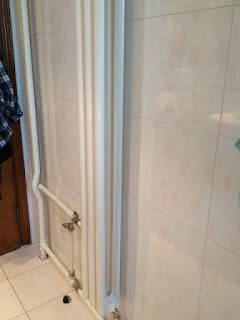 Last night I came home and changed into sweats that hung on my bathroom door.  They were warm.  I felt the pipes on the wall behind the door, followed them to the radiator and...presto: hot!  I raced to the kitchen to tell Ayi the heat was on and grabbed the kitchen's radiator:  cold.  Ayi said (I think) that they'll come on tomorrow.  Yay!  Heat!  I love Beijing.

PS:  News says heat on earlier for everyone because of cold.
Posted by Kayla at 8:35 PM No comments: 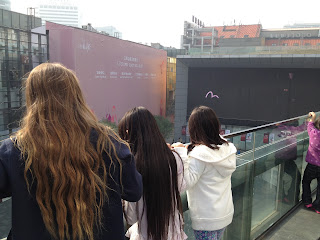 LiLi and her little girlfriends are very pre-teen-like and rockin' out.  At the Sanlitun Village last weekend there was even a car show Chinese performer doing covers of Adele, the girls' current fave. 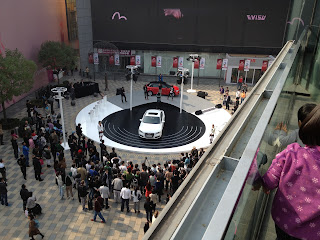 When we first moved here, one of Adele's songs, Someone Like You, was the one we played over and over.  LiLi put that song on repeat as we cruised around that one bedroom service apartment getting ready.  I can still feel how cold it was when we arrived, and dark in the mornings when walked in the frigid air to the school bus.   Itunes keeps track of the plays: 338.   But now we're more into Set Fire to the Rain.

This is our sound track for China.

I've got a handful of Chinese pop tunes, too, from my heiche driver. I still need help finding the pinyin since I can't read the lyrics.   One of the CA moms in our old MI school mentioned learning Chinese listening to Chinese love songs.  I get that:

Here's another from the CN set: 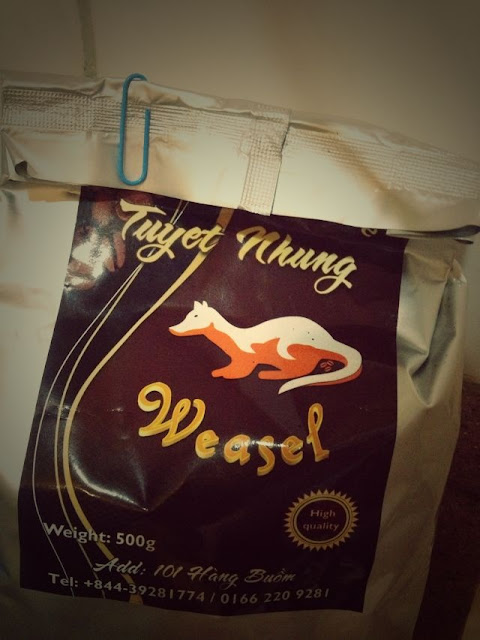 One of the things we brought back from Vietnam was cà phê Chồn or weasel poop coffee.  They feed the beans to the civet cats who poop them out after the critters' intestinal enzymes break down some of the components of the beans.  That creates special flavor.  And how.

I saw the movie Bucket List recently and the Jack Nicholson character has this obsession over his special coffee that in the end is revealed to be poop coffee.  I thought it was all fiction until someone asked if I planned to try it in VN.

We found some in Old Town and I bought it so there's a chance it's fake (not pricey enough) or real, who knows.  Since it is my birthday I brought it to the office.  One of the IT guys (the American one) is a coffee connoisseur who knows his way around a French Press. 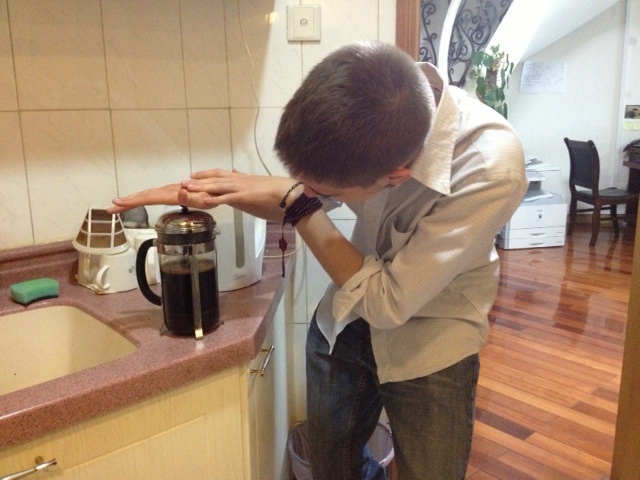 The coffee was really good, very different and more smooth tasting. It smelled very chocolatey but didn't have the chocolate flavor.  Still, it was fun and we were all really really wired today!
Posted by Kayla at 5:53 AM 1 comment:

To evacuate or not to evacuate.  We're on a tiny spit of sand between the South China Sea and a brackish river South of Danang, Vietnam.   It's near the World Heritage Site Ancient town of Hoi An and its  beautiful historic architecture, walk streets and giant Buddha statues.   A welcome relief to dirty, crowded, crime-ridden Hanoi.  Unfortunately, though, it is also the tail end of typhoon season and Gaemi is heading our way, expected to make landfall tomorrow. It was due here, or in Danang, but apparently made a slight turn and is now bearing down on Hue, a couple of hours North of here.  We've befriended an Australian family whose dad is a former Qantas captain so I'm watching their movements carefully figuring he knows weather better than I.

Our fabulous resort is installing wood over the largest of the windows, sandbagging the beach access and Northernmost end of the huge, three-pool-with-bridges pool, and staking the gardens.  The sound of hammering brings to mind a hurricane my ex and I survived in Florida, as we escaped Key West to the sound of locals nailing shut their window shutters and made it to Melbourne in time for the hurricane to change course and land at home.  We were young and being evacuated to sleep on the floor of a school gymnasium was exciting and fun.  Now, middle aged with a 9 year old, I just want to keep us both safe.

Fortunately, unlike our Florida days, I can keep an eye on the typhoon's eye via internet updated regularly including pics.