Beijing Air is a continuous subject of discussion.  Neighbors waiting for a bus talk about it.  Strangers in an elevator talk about it.  Coworkers talk about it.  People post about various air filtering cleaners the size and cost substantially greater than those of a washing machine.  Do you have one in the kids' room?  What brand is it:  Alen or IQ or Blue Air or a Chinese brand?  Is it loud?  Do you leave it on 24/7?  Can your kid sleep?
One of my parents group's threads on the subject shared this TED video from a guy in Delhi India.  India’s air is even worse than China’s according to this recent article.  But this man has cleaned the air in his business using just plants.  It’s fantastic.  No need to use electricity to clear the air of the pollution borne from producing electricity.
Here are the three plants that are said to clean the air:
1) 椋庡熬绔 Areca Palm (chrysalidocarpus lutescens) Chinese name: SAN-WEI-KUI (spreadtail sunflower) or HUANG YE ZI (yellow coconut) 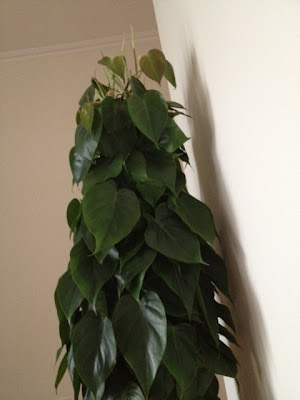 Air quality is also oft discussed at my office.  Some days one of the IT guys runs a little Price Is Right type guessing game as to the AQI numbers. Once the other IT guy even opened the window and sniffed before submitting his number guess.   At some point I shared the TED video and we all discussed the merits and demerits of trying the plant method.  So one day a coworker and I went to the plant market 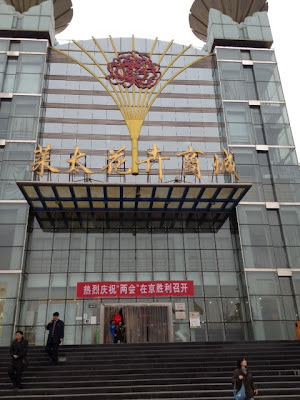 to buy some of the air cleaning type plants.  My colleague, a Chinese-Canadian who came to BJ via Cambodia and the U.K.,  speaks, reads and writes Chinese;  she brought the Chinese names of the three plants on her phone.
The plant market is a huge indoor place full of individual sellers in stalls near the embassies in BJ.  Just walking into the place was relaxing.  It had the feel of a giant greenhouse, which in a sense it really is.   The air smelled sweet and felt moist, humid.  My colleague said she would always volunteer to go on that particular errand even though she’s an attorney with about ten projects on her desk right now; she loved the feel inside the place.  We shopped around a bit and wound up buying several of each of the three plants.  I bought some for home too.
Yesterday morning we woke up to the haze of pollution so bad it looked like a heavy San Francisco fog.  Maybe it was both fog and smog and the fog was what kept the pollution from blowing away.  It smelled bad too.  Not like the smoky smell of some days reminiscent of a California forest fire.  But like a thick, gritty, poison smell.  Like we should stay indoors, keep the kids home, wear gasmasks.  Like we are all going to die soon, in a bad sci-fi movie, huddled inside our bubbles while our planet sizzles and pops, and implodes.
I put LiLi on the school bus sans gasmask.  I went to work.  I felt ill and others at the office were cranky, irritable.  I checked the AQI several times and it rose and rose eventually topping 400.  That’s the highest it’s been since I’ve been paying attention.  Sometimes they say it goes above the highest measurement of 500.  About a year and a half ago the US Embassy comments normally:  moderate; unhealthy for sensitive groups; unhealthy; very unhealthy; hazardous, instead said, “crazy bad.”  That comment went viral, there was an uproar and the US Embassy took it down.
I sat in my office feeling vaguely nauseous and looked out at the  smog enshrouded buildings.   I googled “Alen Air Beijing” and called.  That’s the brand another coworker said she has in her kids’ room at home.  I ordered one small machine for LiLi’s room at a cost of just under US$800.  I figured we can see if it makes a difference; if we can feel the difference maybe we will order more.  This will be us:  Using energy to clear the air of what our use of energy has done to the air.  Crazy bad.
I love China.  I love Beijing.  With all of its faults and growing pains, I am thrilled to be here now.  But. The. Air.  If we wind up not staying for very long it will be because of that.  Just that.
Posted by Kayla at 4:16 AM